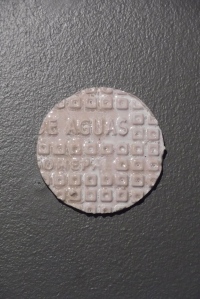 In the first half of 2015, I used the infrastructure of Ar.Co’s Ceramics department in Almada (Lisbon-Portugal) following the school’s invitation to work, within the scope of a residency, on my project Spots #4 – Lisboa.
Spots#4 continues my investigation of the surrounding environment of where I am staying. I look for elements and details of the city that can be found on the streets and in places near the residency. I call it: ‘taking fingerprints’ of a place. Elements deliberately chosen for their apparent insignificance are cast in silicone moulds to make replicas in plaster, wax, porcelain and clay. The process might be considered as negative graffiti: instead of leaving behind a mark or a sign that I was there, I take a part of the street back home.
Every city has its own character. Pavement stones, curbs or drain covers all have different design and dimensions from city to city. But anywhere you go you can find the same insignificant objects between the stones or on the pavements, like chewing gum, twigs, cigarette buds…
My aim is to document the differences but above all to find similarities in all the places I visited and worked in. It is an attempt to build an archive of their identities and the temporary details they contain.
The immediate environment, where I stay, is directly involved in my artistic project. It functions as a point of reference from where my actions take place and from where I start my investigations of the identity of the city. Certain details of this city are translated into tangible objects in which time is reflected. Not only the present but also the past become part of a petrified archive. What is present now may disappear just a few seconds later, or can continue to exist for years. It is an attempt to capture time, to consolidate the identity of the place.

What I found mostly attractive here in this beautiful city was its amazing sunlight. Even without a lot of sun, the city shines and reflects its light as I have never experienced in any other place.
Jen Gossé, Antwerp gallerist with whom I exhibited Spots#3 in 2013, described my work in this way: “Besides a special aesthetic quality and ever-present tactility, her work has the ability to open up to the context in which it is created and displayed.”
By taking these “fingerprints” I inevitably tell stories of the city. While working outside in the streets (looking for details or sitting on my knees making a mould), local residents and other passers-by invariably approach me to ask: “what are you doing?” It is the key to initiate a conversation.
Jen Gossé: “Her presence in our neighbourhood gave a lot of (unexpected) reactions. The residents started talking to her out of curiosity about what she was doing and they spontaneously began telling stories about this place, about Luchtbal (Antwerp).”
In the end, the archive is made up of both the observable characteristics and the private and public stories hidden behind these seemingly pure tangible forms.